We’ve had success over the past 3 years changing our approach slightly as we head down the stretch here in March/April and that will be obvious in our posts.

With so many teams having little (or nothing) to play for we’ll have less leans and just focus on the picks with write-ups of the games we really like.

There are 8 games in the NHL tonight and we’ll be involved in two of them.

Our favorite Monkey Knife Fight play tonight is below. We’ll be going with Kucherov, Matthews and Aho in the Stat Shootout contest to go over 3.5 combined points. 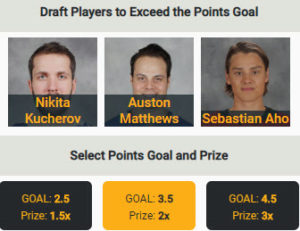 Odds below are at the time we made the pick.

We’ve faded the Nashville Predators quite a bit over the past calendar year and been pretty successful doing it — until recently, that is. After months of underachieving, the Preds are finally showing some signs of getting their act together as they try to claw their way back into the Western Conference playoff picture (as of today, they’re a point out of the second wild card with 14 games to go.) And they’re doing it with defense.

Since defenseman Ryan Ellis returned to the Nashville lineup, the Preds are 5-2-1 despite failing to score more than 3 goals in regulation time during that stretch. They’re coming off back-to-back wins against Dallas in which they didn’t allow a single goal, and they’ve held eight of their last nine opponents to 3 goals or less. It also appears Juuse Saros has finally (and rightfully) supplanted Pekka Rinne as the Predators’ #1 goalie, riding a shutout streak of nearly 140 minutes into his eighth start in Nashville’s last nine games.

We’re not sure where the offense comes from for Montreal here. The Habs scored one goal in their two games in Florida, and their offense has been particularly futile recently at the Bell Centre, where they’ve scored 3 regulation time goals or less in 8 straight and 18 of their last 20. It’s hard to imagine a breakout performance tonight against an opponent that has held the Habs to 2 goals or less in 7 straight meetings and 14 of the last 15.

The full game Under 5.5 was a strong consideration here too, but Carey Price has given up at least 3 goals in 9 of his last 11 starts and 4+ in 5 of them. Instead, we’ll isolate our handicap on the Predators shutting down this Montreal attack once again, giving ourselves a shot at plus money in the process.

Bet this game at Pinnacle – The best NHL odds online!

What the heck has happened to the Islanders?

After charging out of the gates with 33 points in their first 20 games (16-3-1), New York has won just 19 of its last 47 games (19-20-8). Frustration and panic is surely setting in as the Isles now find themselves technically out of playoff position (they’re tied with Carolina for the second wild card, but the Canes have more victories). Not only has New York lost 6 straight and 10 of 12, but the Isles’ only wins in their last dozen games came at home against the Red Wings and Sharks. On the road, the Islanders have lost 6 straight and 7 of 9, managing just 7 goals in their last 6 forays into enemy territory.

Vancouver’s not exactly firing on all cylinders at the moment either, dropping 5 of its last 6 and 11 of 16. However, 11 of the Canucks’ last 17 losses came on the road. At home, they’ve been a much different story (21-9-4, as opposed to just 14-18-2 on the road), and strong starts have absolutely been the key. On the season, Vancouver is outscoring opponents in the first period at home by an average of 1.18-0.65, and they’ve trailed after 20 minutes just 6 times at home this season (14-6-14 against the first period moneyline.) Contrast that to the Islanders, who have led after the first period in just 8 of their 32 road games this year (8-13-11) and have been outscored 0.97-0.72 in the opening stanza on the highway.

Bet this game at Pinnacle – The best NHL odds online!

Sign up below to get our daily NHL tips sent to your email the minute we post. That way, you will always get the best odds on each game…