How Much Does Playing Back To Back Games Hurt Win Probability?

In a sport that involves as much maximum effort and intensity as hockey, NHL teams are at a pretty big disadvantage when having to play for the second straight night.

While Major League Baseball teams play pretty much every day throughout the season, they’re used to it. Chewing gum/tobacco/sunflower seeds, sprinting for the odd ball on defense, scratching your jock and taking 10 swings in a game isn’t quite as draining as playing the close-to-30 minutes of NHL hockey that a top defenceman might see.

And though basketball teams sometimes have to play back to backs, they can limit the minutes played by stars (the growing tendency to sit players for the front or back end of back-to-backs has actually become a contentious issue in the NBA) or slow the pace down when they’re on offence.

Hockey teams don’t have that luxury. If you don’t skate fast with the puck, you’ll get pasted into the boards, the other team will skate the puck and play will head the other way.

But just how much impact does playing on no rest have on a team’s chances of winning a game?

In this article, we’ll look at how much teams’ winning percentages drop when playing the second game of back-to-backs and try to determine just how much stock you should be putting in the rest/no rest factor. 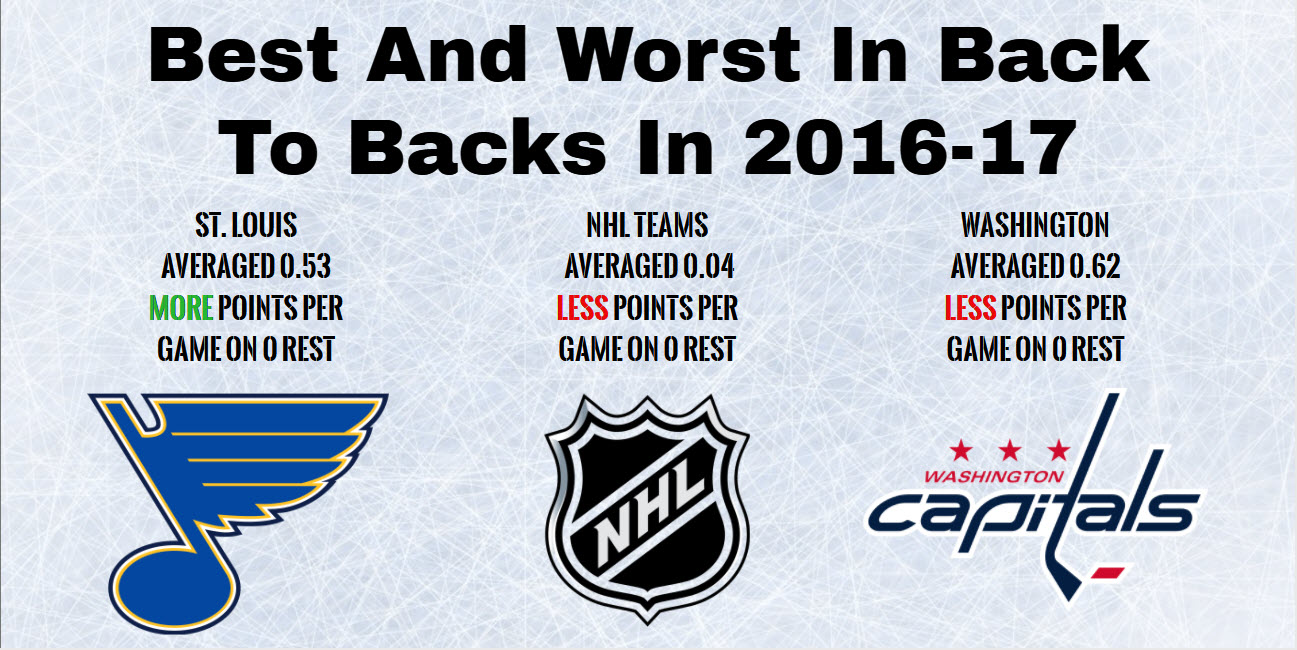 In a previous article about the NHL’s best and worst teams in back-to-backs in 2016-17, we broke down how each team fared on 0 days rest, compared to their performance after having the previous day off.

The St. Louis Blues were a remarkable 10-2 on the back end of back-to-backs, while the Washington Capitals were a mediocre (by their standards) 7-8-1 without at least one day off to prepare.

Collectively in 2016-17, however, NHL teams averaged 0.04 less points per game when playing for the second straight night than they did when playing on one or more days rest.

It was the fifth straight year that NHL teams posted a lower point percentage in the second game of back-to-backs than they did when playing with a day or more of rest (we only went back five years for this study), and that -0.04 differential was the lowest of the five. In three of the five seasons we looked at, the difference was in double digits, including a -0.18 disparity in 2014-15.

Playing for the second straight night is an obvious disadvantage for several reasons. However, it’s also obvious that the disadvantage can be overcome in the right circumstances.

What’s a bit confusing about the Blues’ success in back-to-backs, at least at first glance, is that St. Louis hadn’t been a strong team in that spot in the previous four years.

Though the Blues were 8-4 when playing for the second straight night in 2015-16, that points percentage was a moderate improvement from the 41-28-9 record they posted otherwise. And over the previous 3 years, St. Louis was a mediocre 16-17-4 in its second game of back-to-backs, a terrible record when compared to its 116-45-12 mark when playing with at least one day of rest.

So what changed in 2016-17? Well, let’s take a look at each of the times the Blues played on consecutive days.

To summarize, of the Blues’ 10 wins when playing for the second straight day:

Against teams that made the playoffs in 2016-17, the Blues were 4-2 when playing the second game of a back-to-back. And against well-rested opponents starting their top netminder (let’s exclude teams playing the final game of long road trips, since that’s an extreme fatigue spot), the Blues were 1-2, with the win coming against a team playing its first game of the year.

First, let’s get this straight: Technically, the Capitals weren’t that awful on the second night of back to backs.

So why were the Caps a sub-.500 team when playing on consecutive nights?  The previous season, the Caps were 9-5-1 on 0 days rest, ranking in the middle of the league when it came to point percentage drop-off in that situation. Washington also posted a winning record in back-to-backs in 2013-14 and 2012-13.

Let’s break down each of the Caps’ results on 0 days rest last year:

To summarize, of the Capitals’ 9 losses (including overtime) when playing for the second straight day:

It’s interesting that of the 16 games Washington played on 0 rest, their opponent play their backup goalie just once. That’s the price you pay for being the best regular-season team in the NHL: opponents will never take you lightly, and you’ll always take their best shot.

So How Much Does Playing Back To Back Impact Win Probability?

Over the past five years, NHL teams have averaged .108 fewer points per game when playing for the second straight night than they have when playing on one or more days rest. Earning .108 less of a possible two points represents about a 5% decrease in point production, and theoretically a 5% downgrade in win probability.

However, as we illustrated above, there are tons of other factors that you need to consider before determining how much of a disadvantage a team is at when playing on consecutive nights.

Make sure you look to see whether their opponent is also playing for the second straight night, how much travel was involved for both teams, how good their opponent is, who’s starting in net, and even if there are any motivational factors like emotional letdowns or revenge.

Just because the Blues earned 20 of a possible 24 points when playing on 0 days rest in 2016-17 doesn’t mean they’re in way better shape than any other team, or that they’ve magically cracked the code of what it takes to win the second game of a back-to-back.

And just because Washington struggled in that situation doesn’t mean that Alex Ovechkin needs to spend more time on the treadmill so he’s fresher in games on short rest, or that that trend will continue again next season.

Factor a team’s record in back-to-backs into your handicapping if you’d like, but also be sure to look for any scheduling advantages/disadvantages in the matchup and project who’s starting in net before you place your wager.

Note: This chart lists the difference in teams’ point-per-game average in games on 0 rest, compared to 1 or more days rest